Last year, Denim Première Vision partnered with the French media Thegoodgoods for an entire week of content about denim. The aim? To decipher all you need to know about eco-responsible denim: history, impacts, innovations, and of course, circular economy.

Discover now our first article about the social and environmental impact of denim.

“Everyone wears denim, everywhere, under any circumstances, regardless of age, gender, social background or lifestyle.

Unsurprisingly, denim is most famous as the fabric of blue jeans, an ultimate fashion basic and monument of fashion history. Most of us actually wear denim on a daily basis. It has grown to be such an important and central element of our lives we may have forgotten how little we actually know about it. How is it made? Who makes it? Where is it produced?  Most importantly: is it sustainable or ethical?

It is time for us to try and uncover the secrets of a fabric as ubiquitous as it is mysterious.” 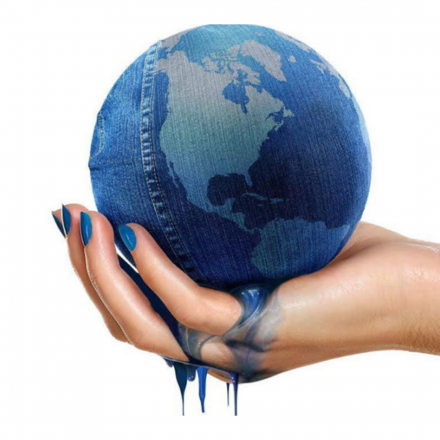 The surprising tale of denim [1]

It is generally assumed denim may come from Nîmes, France or Genoa, Italy, it is still complicated for historians to precisely trace its history. Chances are it was, at least, shipped from these two port cities.

The history of denim is much clearer from the 19th century, when famous American brands, including Levi’s and Lee Cooper, started manufacturing and distributing denim on an industrial scale.

In 1880, denim was advertised by Levi’s as a durable fabric, a material “that can’t be ripped” and “the best in use” for American miners, mechanics and farmers.

Denim began growing more popular with the general public in the 1920’s and 1930’s. At the time, American women were already going around in denim dresses, a level of casualness Europeans had yet to discover. In the USA, denim was already known as the epitome of informality, the fabric of leisure wear, perfect for short shorts, skirts or even beach-wear…

Blue jeans reached the other side of the ocean at roughly the same time, as American cinema resulted in a growing influence of American culture among Europeans.

The old continent welcomed denim as a symbol of the American Free Spirit and the essence of informal fashion.

The popularity of denim soared even further after the Second World War. Europe and Japan developed a certain fascination for the looks of American soldiers and the now famous blue jeans/white shirt combo. Soon, Paris’ flea markets were flooded with surplus goods from the US Army.

Once the informal uniform of the American working class, it had become the must-have piece for the urban youth in the 1950’s. Denim quickly grew universal, everywhere to be seen, on men and women, in all social classes, in cities, suburbs, universities and factories.

Europe started manufacturing its own denim in the 1980’s. French and Italian designers, including Fiorucci and Marithé & Françoise Girbaud, turned jeans into sexy and sensual garments. It was at that moment denim had come full circle and skinny European jeans were now travelling back to the United-States where they sold like hotcakes [1]. 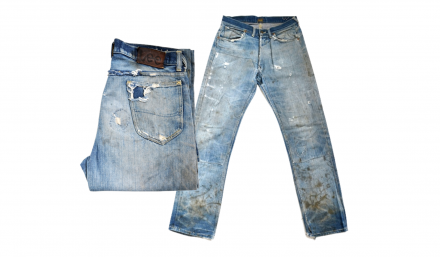 What is denim made of?

Like almost anything we wear on a daily basis, denim is primarily made out of cotton.
What makes it different from other cotton-based fabrics, like chino, is the specific weaving technique used to produce denim in which two different threads are crossed in a twill to produce those characteristic diagonal lines. This particular technique is also the main reason why denim is so firm, thick and resistant [1].

Denim is, of course, famous for blue jeans but it can actually be shaped into any type of garment. Sadly, the fashion industry realised at some point, which resulted in a denim overdose in the 2000’s… 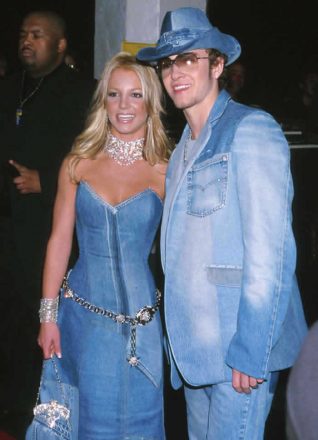 As if wearing a fedora wasn’t camp enough…

Although it is often used in English as a synonym for “blue jeans”, “denim” is actually the name of the fabric itself. Still, a basic pair of jeans or denim jacket necessarily includes a series of other materials: additional threads, metal or plastic buttons, rivets, leather sections etc.
Cotton is also often mixed with elastane or Lycra, a synthetic fiber adding elasticity and comfort to the raw material.

There is thus more to making a pair of jeans than just yarning, weaving and sewing [2]. 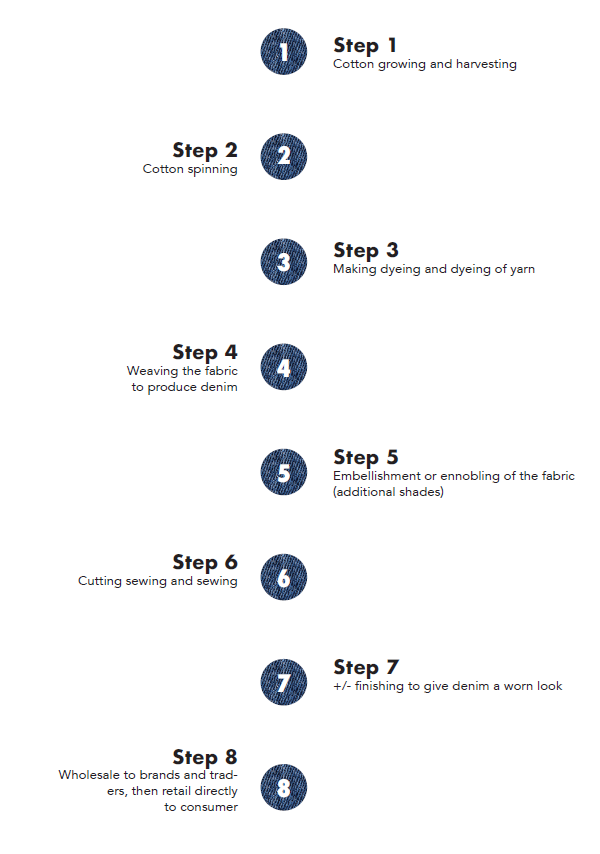 Every step in the denim manufacturing process calls for a specific know-how. The resources and techniques needed are many and spread all over the world. It is thus virtually impossible to produce denim locally and integrate the entire process, from planting cotton to marketing end products, into a single business.

An impressive number of countries are involved in denim manufacturing. In this hyper-globalised process, each region has a specialisation and a precise role to play: the Indian subcontinent,  and Africa grow cotton, Europe, North America and Japan yarn and weave the fabric, North Africa and China are in charge of sewing denim pieces together, India, South-East Asia and the Middle-East dye and add extra features to the fabric…
Finally, once it is ready, denim is distributed and purchased throughout the entire world. 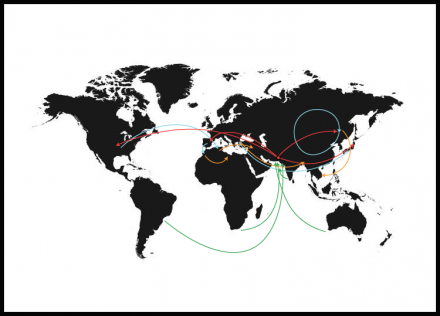 Denim manufacturing actually takes place on all continents. In the end, our garments probably travel the world more than we ever will before finally landing on our shelves.

The invisible impact of denim is in our lungs

An ultra-globalised production and many trips from one continent to another result in an important carbon footprint for every denim piece we wear. Before they land on our shelves, each denim garment travels a distance of 65,000km, emitting 20kg to 40kg of CO2 [3].

This includes the CO2 released by agricultural activities and the use of industrial machines for yarning, weaving and sewing the fabric.

The amount of energy needed to animate the entire supply chain is hard to assess but it should not be forgotten, especially in a world that still relies mostly on fossil fuels. 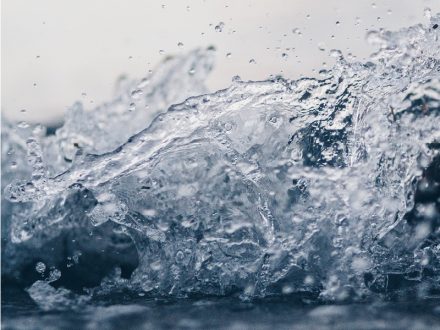 Water and soil also carry the weight of denim manufacturing

Although cotton fields make for only 3% of all cultivated lands, cotton is the 3rd biggest water-consumer following rice and soybeans [4]. However, it is mostly cultivated in countries where water is often scarce. India, Australia, South-Africa and Turkey struggle to overcome large-scale water shortage on an annual basis.

Cotton is a contradiction in itself. It needs a lot of water but it can only grow in a tropical or dry climate.
Its production notably contributed to the disappearance of the Aral Sea, a giant lake in West-Asia, once twice as big as Belgium, now dried up to nothing to irrigate cotton fields in Uzbekistan [5].

Cotton is also unusually fragile and can easily get annihilated by diseases, insects and pests.

The important yields of cotton crops is mostly due to a heavy use of pesticides and fertilisers. In order to reduce their impact, up to 82% of cultivated cotton is now genetically modified. However, the demand is such that even GMO’s require chemicals and an artificial boost.

Cotton is rarely grown in the Western world. Most fields are located in countries with less severe to non existent laws regarding the use of pesticides.

Although blue jeans are traditionally dyed with indigo, their colour is now most frequently obtained through synthetic, chlorine and heavy metal-based dyes. In South-East Asia, such chemicals are sometimes disposed of directly into the local rivers [7]. 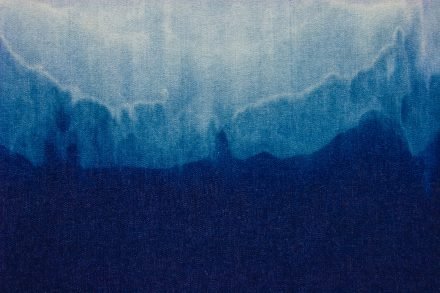 Farmers are directly exposed to those chemicals which contaminate their lungs, lands, rivers and water tables [8].

Still, denim is far from being the only cotton-based fabric. Cotton is actually the most widely used material in fashion. The issues it may cause are to be considered a general problem for the fashion industry as a whole.
Potential solutions are already on the table! Although it currently represents roughly 1% of all crops, organic cotton could be a viable solution. Demand is increasing and so does hope.

The human cost of our jeans

Farmers are the first to be affected by the negative effects of denim but the industry involves millions of other workers across the world and can also be held accountable for their working conditions.

Work is highly regulated in Europe, North-America and Japan. The denim produced in those countries is generally recognised as high-quality and thus purchased by high-end brands and designers willing to pay a higher price. The fabric produced in other Asian countries, South America or North Africa is cheap and mostly used by the fast fashion industry.

Sandblasting is one of those infamous techniques, widely-used to create the “worn out” jean look we all know. The blue colour of our jeans actually fades naturally with time but it may take a few months or even a year for the erosion process to occur. Sandblasting keeps us from waiting by rubbing it out before garments even gets worn.

Sandblasting consists in propelling abrasive materials at a high speed directly onto the fabric. Thin particles, mostly silica powder, are released into the air and inhaled by workers, contaminating their lungs and causing respiratory problems; silicosis and cancers [9].

Sandblasting is now illegal in most Western countries. Turkey, a former market leader, banned this technique in 2009. The more it gets prohibited, the better working conditions are for thousands of textile workers across the world [10].

The end of sandblasting does not mark the end of the “distressed” jeans look. New techniques have been created, making it possible to scrap colour out of the fabric without a single drop of water or chemicals [11], using only lasers or ozone.

The fashion industry knows about the overall negative impact of denim. Still, does that mean we should unquestionably give up on it, get rid of our jeans and stop purchasing new denim pieces? Denim actually grew popular in the first place thanks to its amazing durability and its ability to look better with time. Long-lasting garments are sustainable by design. Learning how to spot the right ethical denim and how to look after it is key to reducing our individual impact on the environment.