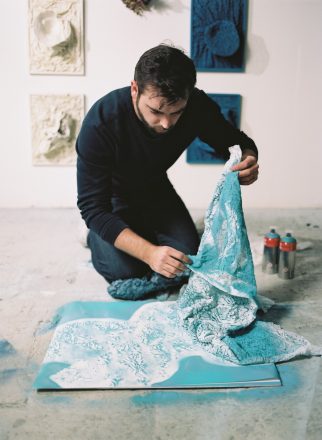 Jérémy Gobé, an inspiring, multidisciplinary artist whose work Première Vision has been following for the past ten years, is the founder of Corail Artefact a project dedicated to the preservation and regeneration of the coral reefs.
Deeply concerned about the deterioration of the coral reefs, a vital part of our planet’s natural life cycle, Jérémy Gobé has been working for over ten years to raise public awareness concerning this critical environmental issue, as well as highlighting know-hows on the verge of disappearing, particularly in the field of textiles. When he discoverd Point d’Esprit, a traditional bobbin lace pattern from Puy-en-Velay, Gobé noted an incredible resemblance to the design of one of the coral skeletons he was using in his experiments!

This led to the fantastic idea of using lace as a support to allow the coral to regenerate, as lace has all the same qualities – roughness, suppleness and transparency – of the structures on which coral spreads and grows

Cotton lace in particular meets these criteria, and in addition is also bio-sourced, biodegradable and biomimetic.

In early 2018, Jérémy Gobé put together a Research, Development and Innovation (RDI) program combining art, science, industry and education for this project, which he named Corail Artefact.
This project uses lace as a support, along with eco-friendly concrete, aquarology tools and a panoply of content and events designed to raise awareness both in schools and among the general public.

This experimental project, whose first tests were initiated in May 2018, became an industrial reality thanks to the Maison Solstiss. Makers of Leavers lace since 1974, and designated as a Living Heritage Company in 2011, Solstiss is figurehead of French exceptionalism, a symbol of quality and mastery of a protected know-how 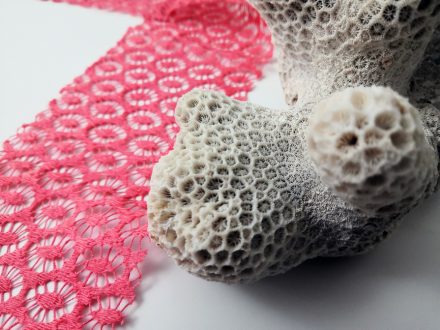 Since February 2020, Jérémy Gobé and the Solstiss teams have been working on designing a pattern ever more closely resembling coral, on sourcing new and more high-performant fibers, on producing an ever higher quality lace and on integrating natural elements into it in order to create new examples of Made in France combining traditional know-how and innovation.

The new lace samples resulting from this collaboration are currently being tested in Guadeloupe with project partner Coraïbes, in an outdoor seawater aquarium that closely replicates actual coral conditions.

This truly innovative and incredibly stimulating project is one we want to share, support and promote, for a future combining eco-responsibility, creativity, technology and know-how!

Denim by night for the Autumn-Winter 22-23