Morocco is a country that knows how to conserve its remarkable textile savoir-faire, which continues to be handed down to younger generations. In terms of embroidery, one of the most renowned and quintessential techniques is that of point de Fès, which takes its name from the third-largest city of Morocco with a rich artisanal tradition.
This art, reserved for women, is an oral tradition carrying with it social, economic and cultural dimensions. It is taught and transmitted from mother to daughter as well as in embroidery schools. It is also a means of creating a social network uniting different generations of women. 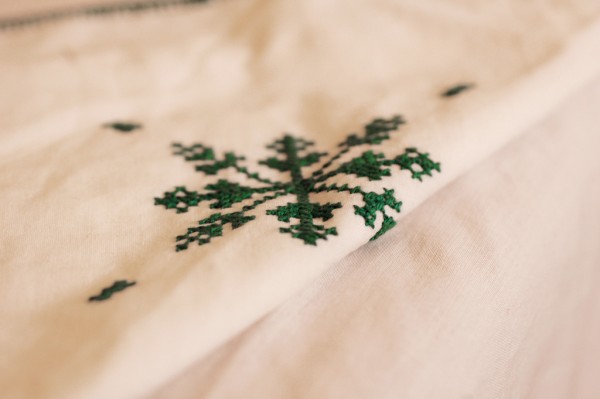 This embroidery, also called « Terz El Ghorza », is a needlepoint technique realized on stretched canvas and currently practiced across the country. The embroiderer creates a drawing progressively, such as a labyrinth of crosses, diagonal ornamentation, or geometrically-stylized flora, which are repeatable and could continue forever. 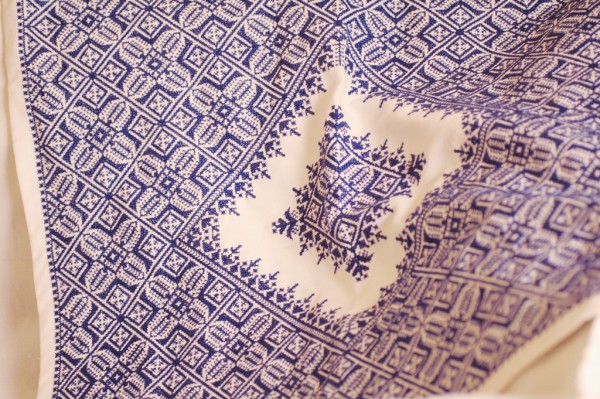 With this technique it is nearly impossible to distinguished between front and backside, as the motifs appear identical on the two faces. The result is regular and without knots. Point de Fès adorns the borders of home linens or inversely the center of cushions, filling empty spaces like a large delicate ornamental tree.
Generally rendered in one color — blue, black, emerald green, dark red — on ecru or white cotton, this embroidery is nevertheless sometimes produced in bi- or tri-color varieties, notably for decorative pillows. In each city the repertoire of motifs and color associations is specific, having developed regionally, allowing experts to determine the geographical origin of a given work. 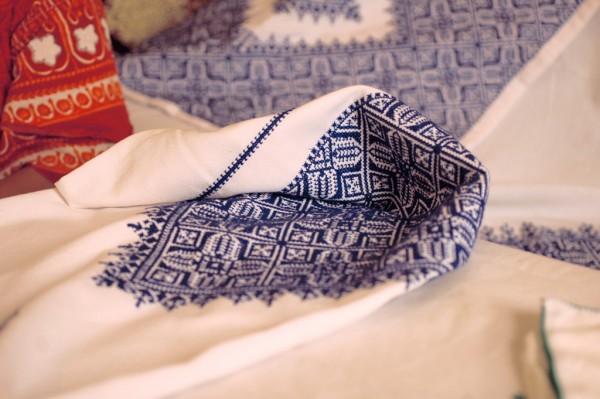 Traditionally young women learned to embroider with the goal of being able to fabricate their marriage trousseau: dressings for a bed, table settings, runners, napkins…she could equally call upon a professional embroidered who would most often work at home. Embroiderers generally had to leave education behind at an early age, and their craftsmanship constituted an important source of revenue for them.
It is a demanding craft, wearing on the eyes and hands. It takes several months of work to create a single fully-embroidered bed set. It will be sold for around five-thousand dirhams, which is approximately five-hundred euros, a modest price considering the time and work expended.