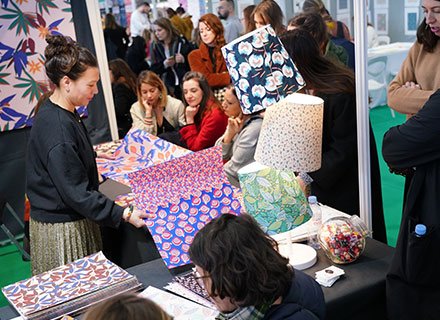 It’s a season of flowers immersed in vegetation. Brands and designers attending Première Vision Designs favoured mixes of floral and vegetal motifs for use in their prints, knits and embroidery. A number of selections featured combinations of lush foliage and small, compact floral bouquets or, alternatively, a totally scattered effect, as seen at the French studio Petites Histoires where « everything is intertwined. »

This willingness to mix several sources of inspiration is often viewed as a new way of treating exotic designs. « For example, we combine African-influences with an « Indienne » look featuring very small floral patterns, in a Liberty vein, which are given a fresh new look by interpreting them in a tropical environment, » said Maria Dauton, textile designer at Jack Jones, an English studio. The pattern repeat effortlessly varies from one extreme to the other. « Selections ran from very large to very small, » says Melissa Wright, director of the English studio Whiston and Wright. These combinations often leave scant room for backgrounds, especially as geometric or animal-skin motifs are sometimes slipped in too. This was seen in particular at Italy’s Bernini Designs and England’s Camilla Frances and Design Union, where the flower remains central while worked in combination with these other classic textile-design themes.

For mid-sized patterns, buyers are often turning to illustrations « with a freehand look, » said Ellie Taylor, designer for Camilla Frances. This trend can also be found at Brazil’s Nomad studio, where big exotic flowers that seem drawn with thick brush strokes were popular with buyers. « Our clients are moving away from patterns that look too vectorized, » says Julia Ferrer Soler, founder of Spain’s Sun Smith studio.  « They want to feel that there’s a person behind the sketch, and that means working with inks and paint strokes. »

Also much sought-after at the show were conversational designs featuring scenes and objects treated in a figurative, repetitive style. This demand could also be noted in knits, with, for example, the little cats seen at England’s Yellow Minnow. The trend also carried over to prints, with extremely delicate mimosa branches or cherries, worked in repeat by designer Watanabe Espinosa Noriko of the Monetiro studio. And it emerged in the ornamentation sector too, as seen at Amanda Kelly Embellishments, where embroideries featuring little animals attracted the most attention.

All these selections are offered in strong, luminous colours, as well as in softer, occasionally faded and washed colourways in autumnal hues, as if to make it easier to pass more smoothly from one season to another. For these specialists, many of the selections made at this February edition will be used to transition from Autumn-Winter 20-21 to Spring-Summer 21.