The new generations are hyper-connected and tuned-in to messages from the stars, chronic multitaskers yet always on the brink of burnout, endlessly tormented by the fate of the planet… What are their hopes, what are the clichés, and what’s the impact of these myths and new values on the market and communications?

This was the wide-ranging subject tackled by the “Voices of Generations – A trend report by l’ADN” conference (Tuesday 11 February, 4-5 pm, Fashion Talks Area, Hall 6) led by Nastasia Hadjadji, a journalist and speaker for l’ADN. Founded in 2013, this French press group, with a quarterly magazine, a daily newsletter and a group of sites registering over 2 million hits per month, offers an overview of our times through its various sites and services, focusing on innovation for businesses (95% of its audience are business professionals). 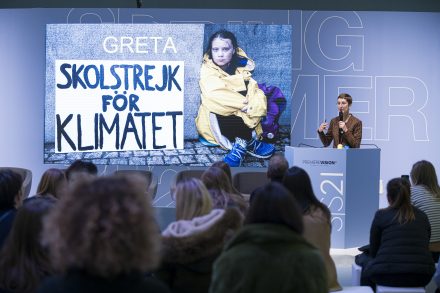 Guiding her audience through the issues that have most marked the magazine’s editorial content in 2019, Hadjadji began by drawing up a six-word composite portrait of Millennials (born 1981-1996) and Gen Z (born 1997 and on): from flygskam – the shame of flying, which has already caused a 5% drop in air travel in Sweden; to the Greta Thunberg phenomenon and eco-anxiety – 98% of French persons under the age of 25 say they are anxious about the future (IFOP 2018 study); and “OK boomer”, a viral meme launched by an online video mocking baby boomers’ concerns, and later brought to the attention of the wider public when used by New Zealand MP Chlöe Swarbrick. She also touched on new communication channels and mobile apps deeply influencing how the youngest adults understand and interpret the world: Tik Tok, where 75% of users are under 22 years old, and Yuka, a French product-scanning app, which focuses consumers’  – and by extension brands’ – attention on the ingredients used in everyday products.

This new picture of current values was accompanied by a profound redefinition of the identity coordinates of the youngest generation, which is particularly sensitive to new non-binary forms of gender, to mental health issues – depression syndromes now impact almost half of 18-30 year olds – to non-traditional holistic therapies and astrology, for example the Co-Star personalised horoscope app currently has 800,000 followers on Instagram alone. Hadjadji particularly underlined the societal and cultural consequences of mobile apps, especially Instagram, whose photo filters can create sometimes unrealistic beauty standards, presenting brands with the challenge of shaping new messages and counter-models to promote inclusiveness and diversity.

Far from being simply cultural parameters, these issues and concerns also have significant economic repercussions, spurring new practices that are radically reconfiguring production and consumer logics, both in terms of messages and products. A growing eco-awareness has led to a new upcycling market where apps such as Vinted and Depop are the major players; the sobriety trend (NOLO, no alcohol, low alcohol) has already prompted brands to offer alcohol-free products; and attention to the risks of tobacco has created a new market for an entire array of alternative products. All these examples illustrate the extent to which factoring in communities connected by shared practices and causes is now an important key to understanding tomorrow’s world and markets.

To close her look at this twin vision of the present and immediate future, Hadjadji was careful to remind her audience that the idea of generations as walled off from each other is both a fictitious and artificial construct. So how do we get inside in the minds of the younger generations? In a continuation of the argument laid out in Millennium Burnout (2019) by Twenty Editor-in-Chief Vincent Cocquebert, L’ADN promotes, through its editorial policy, a decompartmentalized reading of what constitutes a generation, emphasizing a cultural and multifactorial approach rather than just birth dates. Thus, a twenty-year-old New Yorker most likely has more in common with a Parisian in their forties than with someone of a similar age in Japan.

This approach, called as “culture before cohort”, highlights a multiplicity of subtle signals constantly reshaping the outlines of tomorrow’s culture and values in an ongoing and mobile process. It’s important not to forget that an obsessive focus on the youngest generation doesn’t take into account current societal and demographic trends, which point to an increasingly ageing population and at the same time a growing dynamism in this older generation.

Involving both interpreting prescient clues and taking a critical approach to the ready-made myths shaped by the market and the media around each generation, reading the future remains a complex exercise in decoding. One has to read the signs of today as well as anticipate tomorrow’s solutions, and not be afraid to now and then go against the tide of each era’s popular trends.

Previous post Designs selection for spring-summer 21 Next post How are young designers reshaping the rules of fashion?