After a few hours exploring fabrics and trends, the quest for sustenance becomes of primary importance. These places can help.
Details by London-based writer Oliver Horton.

The Standard hotel has transformed one of London’s least-loved buildings into one of the city’s hottest destinations. Formerly council offices, the 1970s eggbox-like site has been scrubbed and reglazed, fitted with a panoramic lift, dressed like a Wes Anderson set and given three worthwhile restaurants: Double Standard, Isla and Decimo. Last to open (in October ’19), Decimo is the cherry on the cake – it’s up on the roof. Blessed with a fantastic wraparound view and strewn with tropical plants, Decimo dining is Mexican luxe, via double-Michelin-star chef Peter Sanchez-Iglesias. The hotel lobby features a hip little library, in case you forget to book (badoom tish). 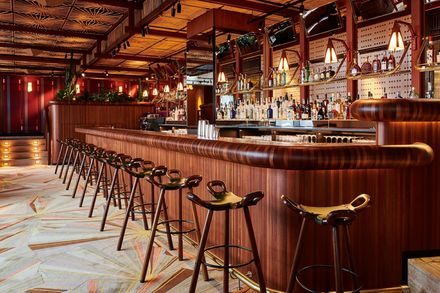 This is a cheat since it’s also a wonderful clothing store. But coffee is served, so we’re crying fair. And it’s on the Denim PV District shops tour, a self-guided walkabout of delightful denim retail organized by Première Vision’s London crew: show your badge and coffee becomes free. Clutch Café is just five minutes from Oxford Circus in a less travelled but richly rewarding part of town. Clutch is a Japanese magazine for vintage/repro Americana, and the store has a great array of publications. But you won’t be able to stay away from the clothing, which dresses half the ground floor and the entire basement. Brands include Buzz Rickson, Mr Freedom and The Real McCoy’s. The latter has a standalone store on Henrietta Street in Covent Garden, opposite Nigel Cabourn’s. If you’re out that way, pop into Santa Nata at 7 New Row for coffee and a custard tart. 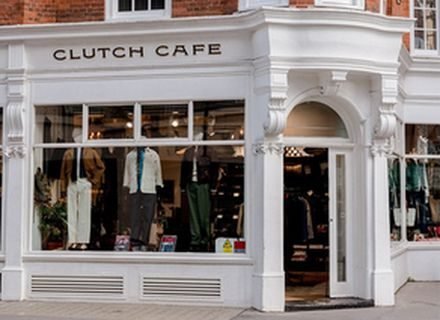 Seven Dials Market is a new food court by Kerb. If the name seems familiar, Kerb is organizer of the street food market at this edition of Denim Première Vision! Seven Dials, a romantic roundabout with seven paths of escape, is in Covent Garden but a hop-skip-and-a-jump from Soho. Seven Dials Market is a former banana warehouse that also did time as the Thomas Neal Centre, home to skate-friendly brands until a few years ago. Now it’s wheelcakes and whiskies, coffee and cocktails; vegan-Mex at Club Mexicana or Venezuelan fried chicken at El Pollotte. Earlham Street, if you amble beyond Fred Perry and across Seven Dials, embraces The Vintage Showroom and Finisterre, plus Oi Polloi’s new London store. 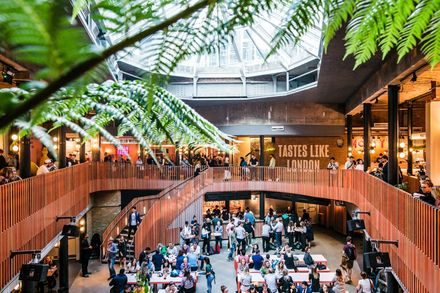 If you only go to one Chinese restaurant in London… or, to be honest, only one restaurant… Xi’an Biang Biang Noodles has the advantage of being walking distance to Denim Première Vision’s Tuesday-night party (which takes place at Cargo on Rivington Street). Xi’an Biang Biang Noodles is canteen-style diner, serving hand-pulled noodles and other classic Chinese dishes. Let the waitron be you guide, but the beef with ribbon noodles is what you’ll tell your friends about. Be warned: chilli splashes are a risk if you eat quickly. And it’s tempting to eat quickly. For the sake of variety try sibling restaurant Sichuan Folk on nearby Hanbury Street. 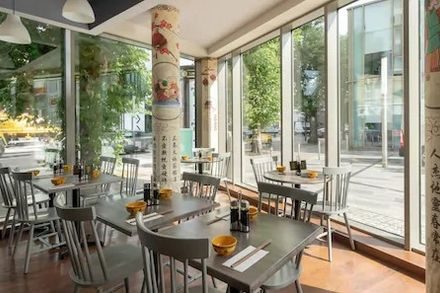 Evidence that veganism is the devil’s work? In name only. Temple of Seitan is leading a wave of vegan fast food. The food at this Hackney take-out joint is fried chicken and burgers, at least in look and texture. There’s nothing animal here, of course. The key ingredient is seitan, aka wheat-meat. Very tasty but if you’re sensitive to gluten be warned: essentially, these ethical concoctions are gluten sandwiches. Many people come to Morning Lane for the outlet stores: Burberry, Aquascutum, Pringle… and the likes of Nike nearby. 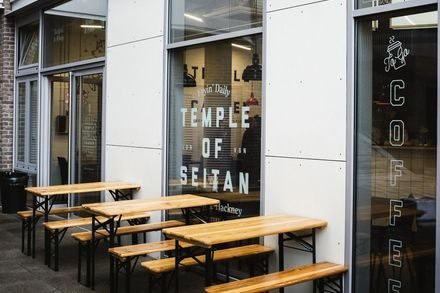