Fresh, natural, sustainable – and versatile, performant and eco-friendly to boot! What exactly do we know and not know about linen?
Victoire Satto, co-founder of The Good Goods, the first eco-friendly fashion & lifestyle media platform in France, hosted an hour-long discussion dedicated to “Linen: ancestral fibre of the future” (Wednesday 12 February, 4-5 pm, Innovation, Hall 3). Panelists Stefano Albini, Geoffrey Bruyère, Marie Demaegdt and Dorothée Gouze joined the discussion to dispel some of the myths surrounding linen and talk about how to build the future of responsible fashion around this sturdy, local, sustainable and decidedly chic fibre. 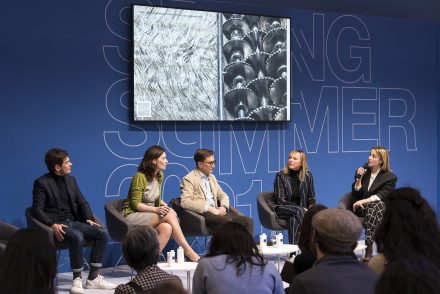 Marie Demaegdt, Director of Textiles and Sustainability at the CELC, Masters of Linen, opened the discussion by introducing a few figures that set linen apart. Thanks to the climate conditions specific to the limited geographical area where it is grown – in France (84% of global production), Belgium and Holland – flax fibre requires neither irrigation nor fertiliser, is naturally GMO-free and easily traceable. The small productive niche it occupies in the world fibre market (0.4%) has been seeing significant and steady growth (50% over the past five years) in response to a growing demand for fibres that are natural, sustainable and certified (European Flax certification for European linen and hemp, and Masters of Linen for products made from fibres grown and processed entirely in Europe).

Stefano Albini is ideally placed to confirm this positive trend. A specialist in top-of-the-range shirtings since 1876, Italy’s Albini Group, of which he is president, has been banking strongly on linen for years – linen now represents 10-15% of the collection – with very promising results. Reaching out to an audience that is just as demanding in terms of aesthetics and quality as it is sensitive to issues of traceability and transparency, Albini constantly strives to maintain a solid relationship of trust with its customers, providing them with a wealth of factual data relating to the company’s decade-long sustainability efforts. The company also hones in on linen’s versatility, and proposes brushed flannel-style versions with a warm feel that are ideal for winter.

Linen’s roughness and irregularity were the features that caught the attention of Geoffrey Bruyère, founder and CEO of Bonne Gueule, France’s leading menswear website, which launched its own clothing brand in 2014. “Blending linen with other fibres is a perfect way to give it new properties and style,” he noted, in addition to helping offset its price, which stems from to its relative scarcity. Bruyère believes that communication is more important than ever to counter ‘green washing’ and raise public awareness of both linen’s virtues and its vast creative and stylistic possibilities. Marie Demaegdt, Textile and Sustainability Director at The European Confederation of Linen & Hemp, also underlined the many possibilities afforded by mixing linen with other fibres, such as silk, viscose, alpaca, wool, and high-performance fibres; as well using it in other techniques, such as knitwear and in particular jersey. She also highlighted linen’s natural performance features – perspiration management, thermoregulation – and the importance of informing the public to help shape new responsible and eco-minded buying practices.

Dorothée Gouze, Collection Director at the eco-friendly Chinese luxury brand Icicle, is very well placed to confirm the Asian market’s growing interest in natural fibres. With the revival of ancient philosophies advocating a harmony between people and nature, younger Chinese consumers are particularly receptive to linen’s natural, sustainable and timeless character. By blending linen and silk, both noble materials, the brand’s latest products reflect that marriage of Chinese and French cultures that constitutes the company’s DNA, along with a keen attention to natural materials and processes.

As linen-fibre producers prepare to meet the growing demand by readying new fields and new spinning mills – and 1% of the world market is an ambitious prospect for a fibre so linked to a specific region, noted Marie Demaegdt – it’s up to designers and brands to expand linen’s possibilities and break the stereotype of a seasonal, casual and wrinkled fabric. From chic style proposals such as embroidered bridal trousseaus and wrinkled, oversized summer shirts, to research into natural dyes at Albini, the range of possibilities is virtually unlimited for a traditional fibre with a truly bright future.

Find the other reports of the Première Vision conferences in our programming section.